GoPro announced last month that it is working on bringing a drone to market in early 2016, and the go-to action-cam company just released the first video taken from their drone. Thankfully, the footage looks incredibly stable — so stable that some shots look incredibly similar to something that would come from a track-mounted or cable-mounted rig on the ground. Of course, the slight slow-motion nature of the shots help mitigate the perception of any small movements throughout the flights, but the footage is surprisingly smooth nonetheless.

They make a point at the start of the movie that the footage has not been stabilized in post (so don't get thrown by the 1440p max resolution on YouTube — although, admittedly, we're not sure why they wouldn't be testing and/or sharing 4K footage). Additionally, the footage doesn't seem to be graded in anyway. If it is, the effect is incredibly subtle. And we can see some typical wide-angle distortion that we're used to seeing in GoPro footage. But that's all okay and as expected.

The good news behind this is that GoPro has an opportunity to use the current market demand, supply, and general competition surrounding drones and their components to create something incredibly affordable for the masses. DJI's Phantoms are relatively affordable, but still take a bite out of "dad's" wallet.

If the premium brand could be willing to put together a crazy-stable package at or around $1,000 with a camera, gimbal, and controller included, their market dominance could put them in a good position to eat up a sizeable portion of the drone market. Ideally, that would mean the aforementioned dads that already own GoPros could easily upgrade to a flight-capable rig for well under that $1,000 mark. Meanwhile, pros would have a great backup or b-roll solution for their Inspire or ALTA productions.

And what does this drone look like? We still have no clue. 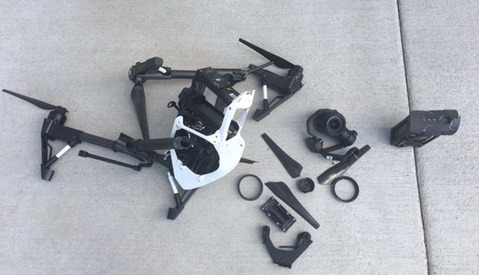 What struck me as "odd" for drone footage were the shots being so close to branches, trees, leaves etc.. Makes you wonder if they have a design that protects the props, or if they have a collision detection system...