The next drone in DJI's Mini lineup, the DJI Mini 3 Pro, is almost upon us, and though it looks to be a successor to the Mini 2, some reviewers have already gotten their hands on it to show that it is, in reality, a different beast entirely with its "Pro" nomenclature.

The always irreverently entertaining Kai Wong got his hands on one to give it a test and the first thing anyone who's ever used something from DJI's Mini lineup will notice is that, finally, the series adds obstacle avoidance. It's not something I ever thought about when buying my first drone, the DJI Mavic Mini, and something that it turned out that I, as a beginner at the time, absolutely needed, as my drone immediately met the business end of a tree on its first flight. For a drone marketed towards beginners, it was a big oversight that is finally corrected in this new, albeit higher-priced model. Totally worth the few hundred extra bucks at $759 without the fancy new RC.

There are of course other requisite upgrades that one would expect in a modern Mini drone: 4K 60p video, 48-megapixel photos, and an increased flight time of 34 minutes all while keeping the same under 249g (or 8.8 ounces)

But oh that RC. One of the major hesitations about bringing out my drone has been the need to use my phone to run it all the time, at least in the price class that I've been playing in. In what used to be a feature reserved for high-end drones, the Mini 3 Pro now comes with its own dedicated RC that has a built-in app and 5.5" screen. No more need for a phone. It's something I'd gladly pay extra for out of the box, as like Wong I've been so frustrated with the need to pull out my phone, plug it in and then figure out which app I was using for different drones.

But as to why this may be your next best TikTok camera? The gimbal on the new Mini 3 Pro can rotate vertically. Instead of cropping in on a horizontally-oriented video image, the whole camera can rotate and capture much more detail vertically. While much older drones like the DJI Mavic Pro had this feature, it makes its return here. Pair that with some of DJI's always-smart focus and camera tracking abilities, and you may get a leg up on all the people still ground-pounding with their phones.

Check out Wong's video for a more detailed look at how the DJI Mini 3 Pro does in the air, along with his usual humorous commentary.

Are you thinking about buying a Mini 3 Pro? Leave your thoughts in the comments below. 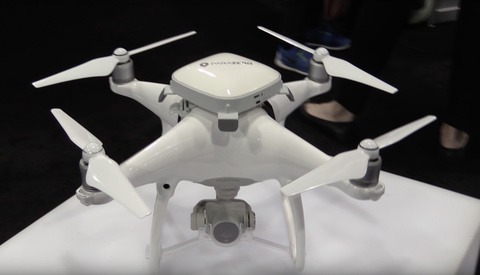