If Fuji's Instax Is the Cash Cow, Should It Produce Digital Cameras?

Fuji's Instax line of products — the legacy of its film heyday — is successful. They've sold more than 50 million cameras, with 10 million alone in the 2019 business year. However, more than that, it's the financial powerhouse for its Imaging division, turning over twice as much money as its digital counterpart. It's strange to think that film is where the money is, but for Fuji, that is the case. So, why is it making digital cameras?

As a photographer, Fuji's modern lineup of digital cameras is legendary. It wasn't the first or even the second to market with a mirrorless camera. In fact, it was arguably late on that score, with Olympus, Panasonic, Sony, Canon, Nikon, and Pentax all beating it to market, with only the more cautious Leica behind. However, the seeds of its move to the X Series were sown much earlier. Fuji's financial success had always been predicated on film, but it knew the writing was on the wall even as worldwide sales peaked in 2001. It had long been a digital innovator, with the DS-1P being notable as the first fully digital camera. This led to their primary strategy of selling a wide range of compact and bridge cameras to an ever-gorging public that pushed digital camera sales to a global peak of 120 million by 2010. This went hand-in-hand with the low-key S-Pro range of Nikon-bodied DSLRs. Behind the scenes, though, the 2000s saw Fuji launch VISION75, a medium-term management plan that saw extensive restructuring and a refocusing around healthcare and pharmaceuticals, whilst also expanding its R&D. In this respect, it was hugely successful: Imaging Solutions registered 54% of income in 2001, which dropped to 14% by 2019, while Healthcare accounted for 44%.

The X Series is possibly a byproduct of this "bonfire of R&D," but either way, it represents Fuji's post-film response to the global camera market, and in that sense, while it was later than other manufacturers, perhaps it was more considered. It certainly combined together features that perhaps were out of sync with its competitors: the X Series was retro-styled at a premium price point, at a time when vast numbers of budget models were being sold. These were desirable, highly functional cameras made to a high specification  — yet portable and intended to be both beautiful to look at and enjoyable to use. Fuji also took the unusual decision to use its own X-Trans APS-C sensor inside. 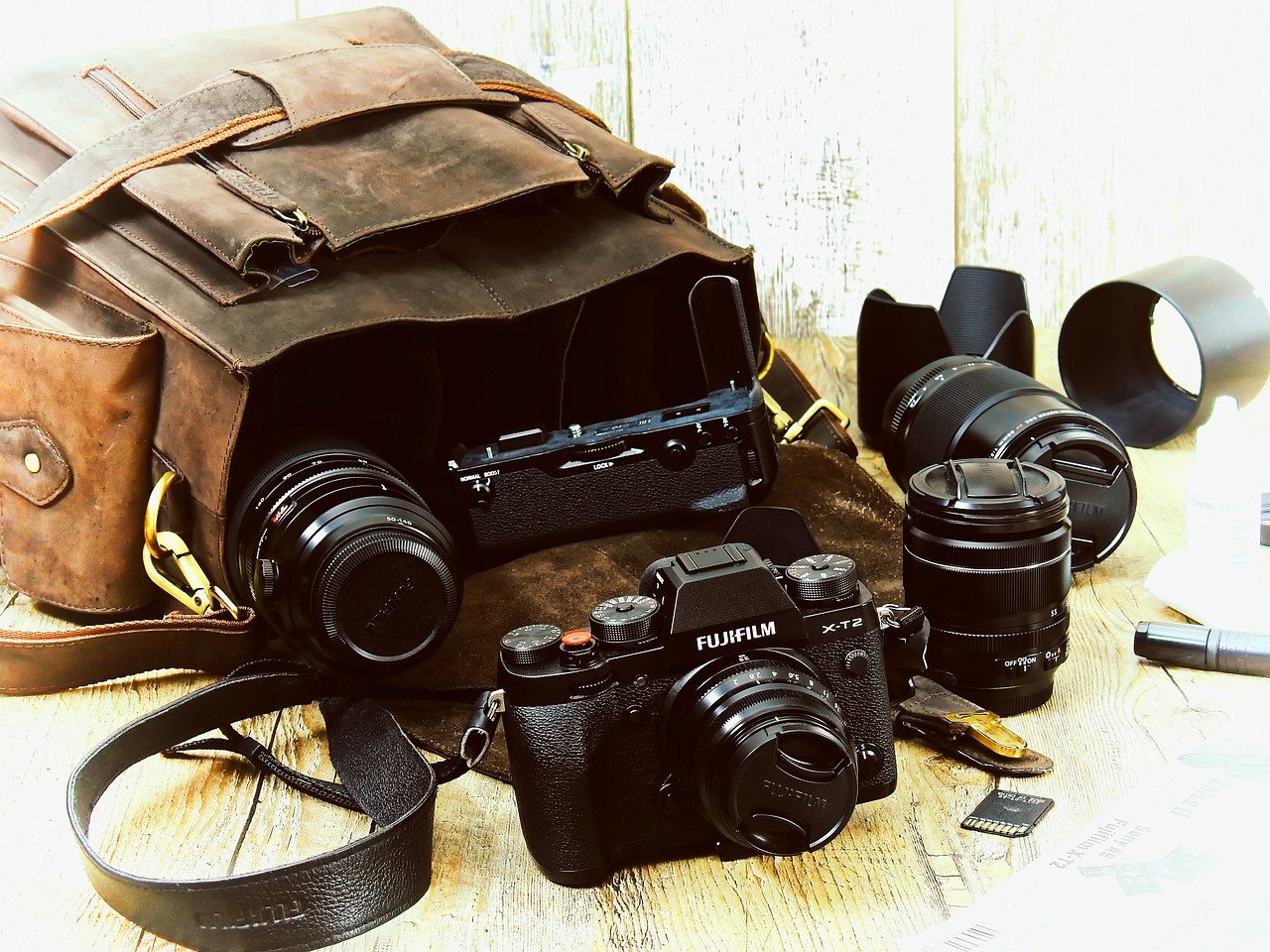 Fuji's design decisions paid off and have undoubtedly resonated with many consumers, making the cameras financially successful. Their "kaizen" approach to firmware updates leads to incremental improvements that are often rolled out to older models. This is in stark contrast to the likes of Nikon and Sony, who irregularly release updates and even then mostly for major faults or lens compatibility.

The use of an APS-C sensor certainly surprised some users; however, Fuji has used this to its advantage by making its cameras portable. They then launched the medium format GFX Series, entirely eschewing a full frame strategy. The X Series (and GFX) have undoubtedly been successful on a technical level with consumers and in sales. Quite how successful is difficult to ascertain, as Fuji is largely opaque on camera sales (other than Instax). While Fuji doesn't rank in BCN's top three MILC manufacturers, this only considers the Japanese market, and Fuji's reach is much wider, with considerable sales in Europe and North America. A Nikkei report on the 2019 camera sector showed Fuji in third place behind Sony and Canon, with sales of 500,000. That represents a strong performance in a sector that is increasingly becoming specialists.

It might be a surprise, but Fuji's Instax offerings date all the way back to 1998 with the release of the Instax Mini 10; Wide arrived the following year, before the long wait to the 2017 release of Square. It exposes the film through the photo rear and reverses the dye layer order, all of which means a reflex mirror is not needed in the camera for image reversal. By putting the pressure plate and batteries in the cameras, Fuji managed to produce a small, economical, consumer-oriented instant film camera right at the end of the film era.

This budget-conscious background is evident in its current product lineup: the Mini 11 comes in at a svelte $70, while the top end Square SQ1 is hardly wallet-busting at $163. By 2002, Fuji sold one million cameras, very solid figures when you consider digital camera shipments stood at 24 million. Even in comparison to the film camera market (which peaked in 1997 at 36 million units) with 23 million units, that is still a solid performance. What this hides is that film camera shipments imploded in 2003, and this is reflected in the sales of only 100,000 Instax cameras in 2004.

The Instax revival and X Series development came after Fuji's restructuring in the 2000s. And what a success story Instax has been for the Imaging Solutions division. Those 100,000 cameras in 2004 translated into 5 million cameras by 2016 and 10 million cameras by 2019. Yes, you read that right: in 2019 Fuji sold more Instax cameras than the entire digital camera segment last year! This harkens back to the "pile it high, sell it cheap" mentality of the early 2000s; however, this simply reflects what consumers want to buy. And they want to buy instant cameras, which is also the reason for the revival of Polaroid through the Impossible Project, which is now Polaroid again. The success, besides 10 million cameras selling around the $100 mark, is through film sales, which come in at around 65 cents a print. It's all refreshingly analog and simple.

However, the success isn't only in terms of the number of units shipped. It's worth remembering that 14% of Fuji's income comes from Imaging Solutions. Of this, 10% is from photo imaging (aka Instax), with only 4% from electronic imaging. Yes, Instax turns over twice as much as digital. As much as we might love the X Series, the division's financial success is largely based on film, which seems somewhat ironic given the current direction of development.

Fuji is in the unusual position of having a successful Imaging Solutions division, but more than that, it is making money. Unusually, that profit appears to be based on film cameras and film sales. Looking at the range of Instax cameras available, I imagine that research and development costs are fairly low! The same can't be said for their digital cameras, and it is, therefore, possible that Instax is cross-subsidizing electronic imaging. Fuji has remained committed to its mirrorless cameras, and its roadmap continues to expand the lens lineups while innovating on the bodies. Yet, it raises the question as to whether this is a sound investment. Their digital cameras are likely loss-making a result of relatively low sales (compared to film) and high research and development costs. This is now being compounded by falling camera sales and fierce competition from Sony, Nikon, and Canon as they expand their ranges, while Olympus and Panasonic also remain active and successful in this segment. It's not an easy sector to be in, and the traditional markets that Nikon and Canon have relied upon are rapidly changing. Cameras are undoubtedly luxury and professional items now, so the APS-C and medium format strategy may well turn out to be the right one. Or is full frame the way to go as the economies of scale, sensor technical innovation, and lens improvements make the difference compared to medium format negligible? Will medium format become an expensive albatross around Fuji's neck? Should Fuji retain its digital cameras?

Editorial Photography / January 14, 2015
How Camera Companies Are Doing It All Wrong, and How They Could Fix It
Log in or register to post comments
11 Comments

I'd love to see more cross-polination between their digital mirrorless cameras and their Instax line. They've dipped their toes into it with the Instax SQ10 and their line of portable Instax printers, but I'd love to see a proper X-mount hybrid or deeper integration with the wireless printers; maybe some kind of USB printer that you can connect directly to an X-series camera and print with 1 button press from the gallery view?

Yes Fuji should give up a third of their revenue and go all in on one product.

I mean... why would we not want them to continue making cameras? It's good for all of us, regardless of whether you use their products. I personally do not use their cameras, but competition is good for everyone.

And if we do want them to continue, this is just speculation from a pure business standpoint - one that we lack any actual knowledge about to make any kind of educated assumptions. We have no idea whether or not their ILCs are making them money or losing them money (though I have a pretty good guess and it's not the one that's bad for Fuji).

I guess I'm not really sure what this article is trying to accomplish? Like what's the goal here?

They should make a serious film camera. Their insta sell more than their digital

I always thought they should combine a cheap sensor with the Instax so you get both an instant photo and a digital copy.

Should Coca-Cola stop selling Fanta? They seem to make the majority of their money from the sale of Coke...

Fuji do make a Digital Instax. Its called a "Liplay" and I have one. Its pretty basic as digital cameras go, you are better off taking a pic with your phone and using the the Liplay to print. Thats the liplay's strength - as a pocket sized digital printer that prints on Instax Mini film. I would love to see either an Instax with proper manual controls, or a beefed up Liplay with decent sensor.

Isn't the Instax SQ10 or something named like that a digital camera that printed the image on Instax film? Basically a hybrid digital/instant camera.

Yes the SQ10 is the same as the Liplay, only real difference is the type of film.

Fujifilm is one of the few camera companies making a profit these days. They are clearly doing something right. It might just be more relevant to question the business decisions of the companies not making money in this business.

Instax sells well, sure. At one point, they were selling a million cameras a month. But is this sustainable, or a fad? Do those users keep buying film, which is their big profit basis? The cameras themselves likely go out the door near cost. Except Leica's Sofort, of course.