How I Got the Shot: Stuck at Home Edition

Everyone is dealing with this new normal in different ways. A lot of people have been finding all sorts of creative ways to keep themselves busy. Not wanting to be outdone, photographers all over have been sharing amazing and humorous photos often shot within their homes.

Trapped at home and away from his studio equipment, photographer Mike Calabro looked for a way to beat the boredom while also fulfilling his need to be creative. An outdoor lifestyle photographer based out of Chicago, Calabro has worked with all kinds of great clients, like Nike, Red Bull, Victory Motorcycles, Outside, and Surfer Magazine, just to name a few.

Being immunocompromised, having recently been diagnosed with cancer, Calabro started self-isolating earlier than most. His girlfriend, a nurse working at Loyola University, has severe asthma and has been working from home as a phone nurse. So, the need to find a cure for their cabin fever was becoming real. 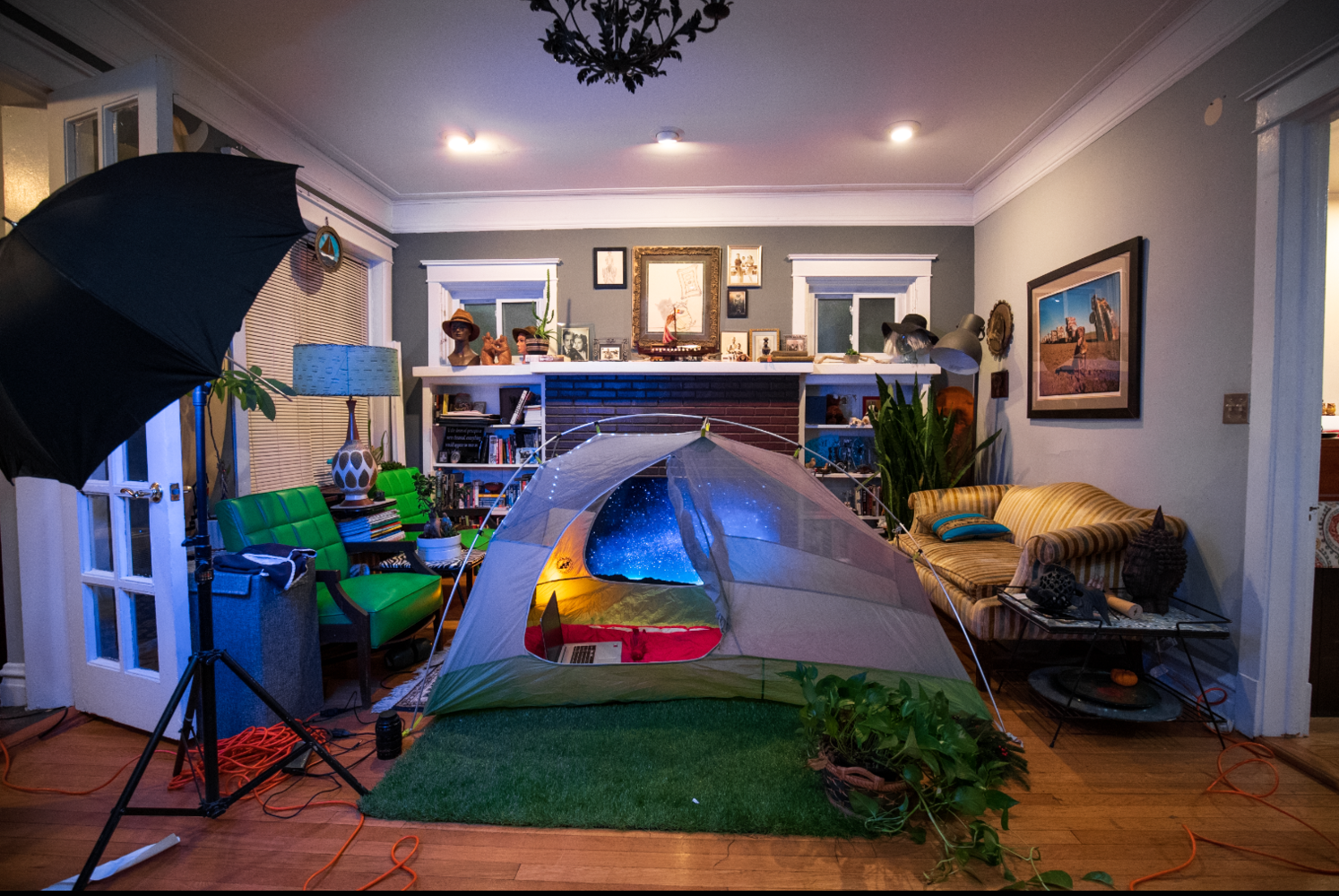 Unfortunately, most of his gear was at the studio set up for a project now put on hold, so he had to get creative with his lighting. "Luckily, I had 2 flashes still at home. For the backdrop, I used my 55" TV and found an image that was taken during the blue hour," Calabro explained. One flash was gelled blue and used to light the foreground, while the other lit the background so you could still see the shelving and know it was shot indoors. There was only one stand and an old umbrella, so the background light was placed on a skateboard. For a campfire effect, he used an LED flame effect bulb that was kept behind his aquarium. His girlfriend was the model and was lit with the laptop monitor.

As an outdoor lifestyle photographer myself, I know a lot of the outdoor community is missing the call of nature and wishing they could be self-isolating in the wild. But, it is important for us all to stay the course and finding ways to use our creativity to find a cure for boredom is a great way to not lose our sanity. 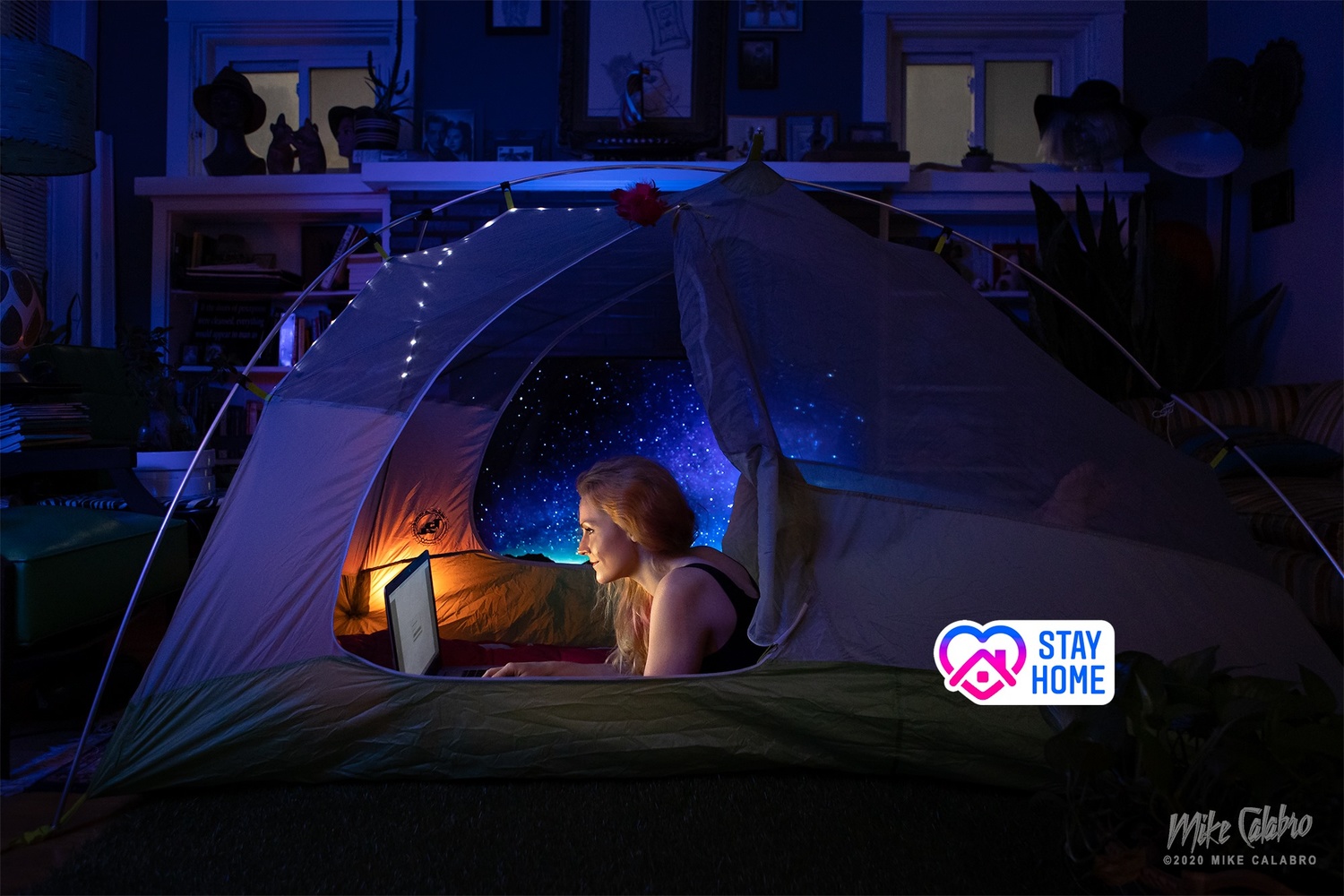 Do you have a creative story of how you have been keeping busy while stuck at home? Share it in the comments.

All images used with the permission of Michael Calabro.

Michael DeStefano is a commercial/editorial photographer focusing on Outdoor Lifestyle and Adventure. Based in Boston, MA he combines his passion for outdoor sports like climbing and surfing into his work. When not traveling or outdoors he is often found geeking out over new tech gadgets. 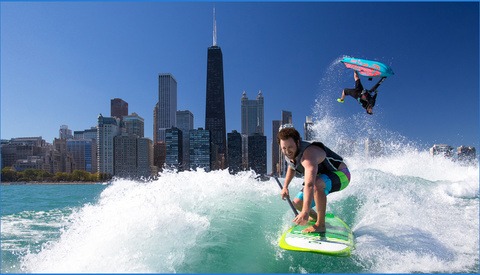 Sports / April 16, 2018
How I Got The Shot: A Spontaneous Misadventure 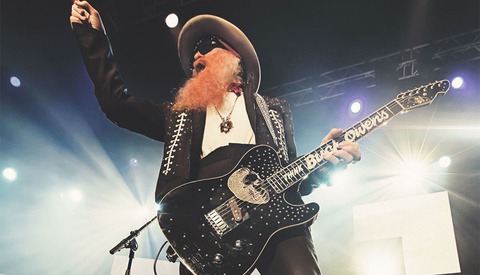 Music / April 25, 2017
Living by the Three Song Rule as a Band Photographer

Landscapes / February 17, 2018
Dude, Where Did You Take That Shot?
Log in or register to post comments
30 Comments

Have known Mike for more than 20 years, and he's always doing amazing things to get amazing shots. No surprise here! (Be well Mike.)

That is a perfect way! To beat the normal nightly routine. With being a father of a 4 year old finding ways to keep it fun could be difficult at times. With a tent a flame bulb and a lil creativity we could be in the wilderness in minutes! The idea is a great one and the photo is amazing! It puts your eye right in the tent not the background. Outstanding job!

It’s all about working with what you’ve got. Nice work!

This is brilliant! At first, I thought this was taken on the front lawn of the house... and wondered how he got the stars. Well, that said, the image told a story for me as I discovered everything in it. Wonderful!

While the pandemic and the associated shelter-in-place order is not something anyone would want, the limitations put in place by it have really lit the creative fires in many. Like nature, their artistry finds a way. I also love the commentary inherent here. Many attempt to bring the comforts of the indoors to the outdoors when camping. Mr. Calabro has flipped the script here, bringing the outdoors in. I love the shot.

Wow, I love this photo! Thanks for this article, I'm going to try to recreate it with my kids! Hopefully they can stay still haha!

I love this! I bought a tent for my sons Bday after seeing this article so we can do an indoor camping trip because we can’t have a party this year with the pandemic. Great idea and so creative!

I've known Mike for the better part of a decade and he's a true professional, especially when he has limitations thrown at him. He hunkers down and gets creative, so it comes as no surprise to me that he can create such a professional looking and beautiful shot in the same living room I've put my stinky feet up in after a long road trip!

I am always amazed at Mike’s creativity whether it be with his photography or the stories that accompany them. I absolutely loved this photo from the very first moment I saw it. The magic of the stars, light on his friend’s beautiful face, and the campfire bring so much life to the photo and spur the viewer’s own imagination while you can still see that it was executed within a room. Bravo Michael, well done!!

I am continuously searching for sources of inspiration. Dig the article. Dig the shot. Dig the photographer.

Love this photo! Staying sane while sheltering at home these days requires some out-of-the-box thinking and this photo is super inspiring. Amazing what can be done with some creativity. Talented photographer, for sure.

It doesn’t take an expert to realize that Mikes work has a level of impact you don’t see often. That said even an expert would agree his work comes “alive” from experience of course but a unique approach from subject matter to technique. At the end of the day, as in this piece, he has drawn you in with detail that makes you feel a part of the story but maintains an atmospheric dreamy quality that creates a deeper wonder and compelling curiosity. Always looking forward to seeing his work as it goes deeper to explore lasting emotions and thought.

What an incredible concept! I'm floored by Mike's drive to keep feeding that passion during such discouraging times. As a cinematographer, this is truly inspiring. Great project, Mike!

Mike is one of my favorite local photographers. His master of light, color, and composition is obvious here. More importantly, he's got a wonderful imagination. This is such a creative series. Bonus: He's a great writer, too.

Awesome shot. Really captures the adventure vibe, as well as the yearning so many of us are feeling for those magical nights spent under the sky. Also a good reminder that we can be super creative with what we have on hand. Thanks for the inspiration!

All aspects of the shot are really cool. I especially like the use of the television and the skateboard. The image is just so inviting and peaceful. Well done.

I can almost feel the cool night air already. Great use of sparse equipment, imagination and a friend. I look forward to seeing more from Mr. Calabro, I'm inspired!

Having been around Mike skateboarding and surfing, I understand his need to go outside and be active, But I can tell he’s making the most of his time indoors!

Hi. I’m new to the scene but I’d this something I can do with my Nikon D3200? In your opinion? I love this photo so much and I’d love to personalize it with my wife and kids! Thanks!

Great shot Mike. I hope we'll see more surf and skate shots from Mike in the near future as well.

Calabro is definitely one of the harder working and resourceful creatives I know stopping at nothing to get the shot... As writer accompanying him on a shoot for a boat magazine of catch and release shark fishing I remember Calabro utilizing anything to get close to the gnashing and not too happy 12 foot blue shark as I helped him hang from the bimini by his ankles so he could look into the sharks mouth. Glad to see you are still nailing it Calabro!

Love the starry night back glow - like the stars peeking over a mountain sunset..

Amazing photography! Use what’s available and create a great story. Love the inside/outside conundrum! Proud to say I knew Michael way back when he was a creative 16 year old, and he only gets better with age!

Wow! This is awesome. What a cool idea. I love his creativity during this crazy time.

Though pictures are a frozen moment, it's amazing what a good shot can do to capture a feeling that extends far beyond that moment. Thanks for the peek behind the curtain at the creative process that makes that possible. The photographers mental preparation and vision seeps in a shot like this to allow us to see and feel the forth dimension. Bravo!

Awesome photo,thanks for the inspiration!

Great shot! Creativity is possible from anywhere. An inspiring image!

Clever use of novel light sources. Like an Old Masters painting...