Fuji sits in an odd place in the camera industry — beloved by camera enthusiasts for their retro styling and image quality, they continue to develop desirable cameras, but have never managed to break in to the realms of the top three manufacturers. Is this perceived failing actually a part of their game plan?

Fuji has never really been a camera company — sure it has manufactured cameras since 1948 but its core business was always film. This was how it started out in 1934, going on to become the largest film manufacturer in Japan before squaring up against Kodak for global market share. Their film manufacturing naturally led them to the world of print, eventually forming a joint venture with Xerox to market business photocopying solutions to the Asia region. This business diversification gave them a vested interest in electronic imaging and magnetic materials which also saw them move into medical imaging. So whilst they had manufactured optics and camera bodies from the 1940s, their path to digital imaging ended up converging with the trajectory of camera development. This is best exemplified in the production of the Fujix DS-1P, the first end-to-end digital camera.

Fuji's camera business introduced a 35mm SLR in the 1970s which eventually sported the original X-mount, but also produced medium format (fixed and interchangeable lens), compact, subminiature, disc, instant, and APS cameras amongst others. What's interesting about the DS-1P is that it initiated the demise of the SLR for Fuji, however, the company kept its hand in the market through a partnership with Nikon that used Nikon bodies and produced cameras like the early Fujix DS505 or the Finepix S series in the 2000s. However it never natively returned to the DSLR. Like many manufacturers of the day it also sold a large number of compact cameras to the burgeoning digital market.

What's interesting about the current flat-lining of camera manufacturing is that it is mirroring that of film manufacturing. Fuji's estimate of world demand for film (below) peaked 1998-2001 and then, as digital cameras took hold, imploded. The salutary tale of Kodak is that you can be the most successful business in your segment and be investing and advancing the technology that will replace it, yet still fail. It's therefore testament to Fuji's abilities that it managed to plot a strategically successful course through this period. 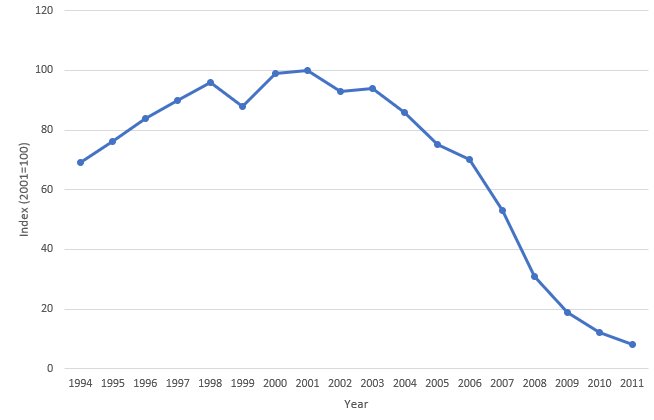 Of course, what this hides is that the film business was largely an oligopoly because the barriers to entry were so high. In contrast, because digital camera manufacturing was modularized it allowed relatively small manufacturers to compete. That isn't to say that there wasn't money to be made, but rather the type of business was different and, with small margins, needed to managed quite differently. As I've commented on before, the route to greater financial stability is through diversification. For access to related markets, greater economies of scale, and the utilization of existing capabilities then it makes sense to horizontally and vertically integrate. For example, Sony makes sensors, as well as smartphones and cameras. However, stability comes from sectors that are financially independent, such as Fuji with pharmaceuticals and imaging. And so Fuji's route to a declining market was to follow a three-pronged approach to diversification developed under the leadership of Chairman and CEO Shigetaka Komori. The medium-term management plan — VISION 75 — implemented structural reform, targeted new growth sectors, and consolidated management capabilities. This meant reducing film production and closing facilities, whilst auditing their existing technologies and seeing how they aligned with global markets. At that point, they could spin up new R&D facilities with a focus on making the teams more cohesive and interactive. Healthcare was a clear target both in terms of medical imaging, but also the sideways step into pharmaceuticals; that is now paying dividends after the initial investment. In 2001, Imaging Solutions (predominantly film) accounted for 54% of income; this had dropped to 14% by 2019, while income had doubled to ¥2,300B with Healthcare now making up 44%.

Taken in this context, it's easy to understand the downscaling of Fuji's film production and photo finishing segments, as well as killing off the S Pro range of Nikon bodied DSLRs. Fuji continued their profitable range of compact and bridge cameras, however, it was the X-Series that marked a shift in focus for their camera business by moving to a retro-styled range, targeted at a premium price point. They eschewed DSLRs, targeting high value, portable, cameras that sat above their compact ranges, but below the full pro cameras of the likes of Nikon and Canon. The X100 was the first model out of the gate in 2011, followed closely by a compact and a bridge camera. However it was the seminal release of the interchangeable lens X-Pro1, based around Fuji's own X-Trans APS-C sensor, that introduced the world to the new X-mount and its lenses. This was an intense period of innovation in the camera industry or bonfire of the mirrorless, that saw all the manufacturers release new camera systems. Fuji's efforts won it plaudits and a loyal following and whilst it hasn't taken significant market share from Canon, Nikon, or Sony, it has none-the-less been a commercial success.

Central to its strategic approach — in contrast to other manufacturers — has been forging an APS-C only range that targets finely crafted cameras that are pleasurable to shoot with, good (but possibly not great) image quality, and great optics, wrapped up with a focus upon photographers. In fact, it is because of this philosophy that they believe that APS-C is the best choice for photographers that seek that shooting experience, along with the quality of the final product. This is also the reason for the release of the GFX medium format range, which targets those seeking exceptional image quality. However, in the process they are redefining the meaning of portability and price in this segment, so again pushing into a new target market and competing where they have excellence.

Perhaps what is most surprising about Fuji is that they've never ranked in the top three for BCN Market Share in Japan, although Nikkei report sales data for 2019 showing that they were placed third for mirrorless (500,000 units), after Sony and Canon. This not only shows the strength of sales, but also how important the overseas market is to them. Perhaps the biggest surprise, is the immense success of the instant photo Instax product line (both cameras and instant film) which is the principle revenue driver in Imaging Solutions. As I noted above, only 14% of turnover comes from Imaging Solutions: this is made up of 10% from photo imaging and 4% from electronic imaging. Put simply, the Instax business turns over twice as much as digital imaging and is the source of much of the profit for this section. Instax sells more cameras than digital at 10M units in 2019 and reflects a growing consumer demand for film (and particularly instant film) which takes Fuji back to its roots. Put that number in to context — not only are they film cameras, but unit sales are bigger than the whole DSLR market (albeit at a much lower cost)!

Fuji has played to its strengths and this is reflected in the success of both the Instax and X-Series lines. The mirrorless APS-C strategy has worked well for Fuji and the X-mount is competitive in the segment, backed by a large range of high quality optics. However the dynamic growth of Sony has muted Fuji's attempted inroads to greater market share and with Canon and Nikon now fully focused on mirrorless, competition is fiercer than ever. It's possible that the GFX line has been released at the optimum time, splitting the market away from its obsession with full-frame. Only time will tell, however, Fuji has demonstrated that they have a keen eye for betting on the right market segments.

And this brings us back to why fourth place is best. It's not only about how much market share you have (although that can be important), but whether there is a market for your own business and if it is profitable. The niche Fuji has carved is less competitive than the segments Sony, Nikon, and Canon are in which makes for a sustainable business. They have also taken a long term view, born out of VISION 75, that began with refactoring their camera product lines. This process has allowed them to develop gradually and afforded them the flexibility to experiment and take risks simply because it is only one small part of the overall business. As a result, I expect Fuji to be a long-term player in the market and see it continue to develop its product range.

Business / May 18, 2021
What Does the Future Hold for the Camera Manufacturer?
Log in or register to post comments
8 Comments

I feel like Fuji hangs out in the back and just chills. They listen to its audience and produce good products.

Another pro point for not being top dog in sales: If your production line is geared to produce a million units a year you damn well need to sell that million units. Each year.
Because said facilities and workers need to be fed and paid for.
Which in fact turned out to be un- diversified Nikon's worst nightmare in the last couple of years.

"Fourth place" is two words. But don't worry, it's just the headline.

Maybe somebody should purchase Grammarly.

The best thing about Fuji's position in the high-end APS-C space is that the other manufacturers basically are unwilling to produce an equivalent APS-C body to something like the X-T3 or X-T4 because doing so would cannibalize the all-too-important entry level full-frame market.

I think Fuji s a lot like Mazda, they make some very good and sometimes quirky products and have a strong user support. Don't need to be #1

Nonsense.. It's good until your sales don't mesh with the cost of doing business. MF is no substitute for FF especially at their cost, but many would say the FF market is crowded, um so what about the APS-C, you have Sony, Canon, Nikon, and even to some extent Sigma and Pentax. If one really notices how Fuji has changed over the years and that's not a good sign for things to come because at the end of the day everyone wants to sell it but when your niche film cameras out sell your expensively produced pro and prosumer offering... Uh oo. You want those entry-level to sell to ad hopefully people go deeper into your system in conjunction win over pros but pro don't switch bodies year to year for what works for them today does so tomorrow not unless it makes their job grossly obviously easier as well quality improves. Kaizen!