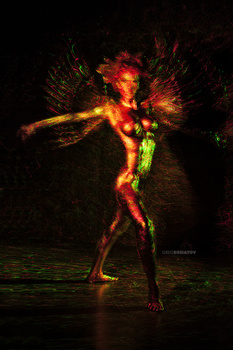 This image was one on those images that was unplanned and spontaneous.

We were shooting another image for my 'Metallica' series and then I had this bright idea of using a couple of lasers with a long exposure.

Ashley was totally painted with a combination of gold powder and olive oil and then I had the bodypainter and makeup artist hit her with these $25 cheapy disco lasers that I had in my studio.

I had one laser front left and the other, back right.

I asked her to flap her arms like a bird and then freeze during the 5 second exposure. That's how we got that effect. Other than some 'punching' up of colours, the rest is all in camera.