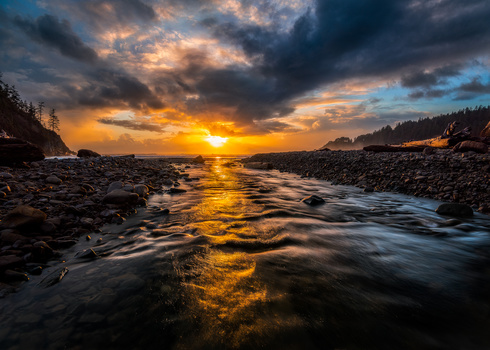 Today I present a photo that I shot on the Oregon coast during the spring of 2020.

As I recall it, I did not have the highest hopes for sunset producing anything crazy on this day, but after looking over weather apps & tidal charts during the morning and with the sky being very overcast for hours each way on the Oregon coast I decided to give this iconless beach a chance to shine even though I really didn’t have the highest hopes something good would go down.
Fast forward to later in the day and after sitting around waiting a while I ended up getting lucky towards golden hour because the clouds started breaking up a bit & moving around fast which ultimately resulted in this pretty cool scene. Looking back I feel lucky to have wittiness as well as capture this scene because I assure you that what was going on here did not last but a few minutes tops before the sun was engulfed by the clouds again as it dipped below the horizon shortly thereafter I captured this photo.

dude this looks SOOOO much better on my PC than the phone!