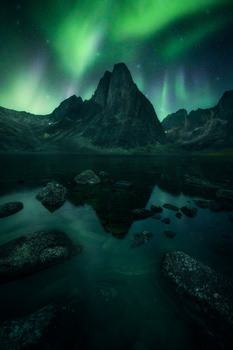 The Edge of Night

During our last night at Divide Lake, we were blessed with an incredible display of the Aurora. As stated before, nothing, in all aspects of photography, gets me more excited than waking up in the middle of the night, surrounded by monstrous mountains around me, with the Northern Lights kicking off overhead. With the added stimulant of excitement, I packed my gear and bolted southward to the other end of the lake. Hiking alone in the dark while being in grizzly bear country may not have been the greatest idea. However, I had my objective, and this was my only chance to photograph this peak under the Aurora. Once I found this composition, @jay.klassy
And @brycemironuck_photography
Joined me, and we all shot together. I felt more at ease having those two around for company!

Although most of the Aurora primarily stayed North, we got the odd burst and had the dramatic lights dancing over this particular mountain. I captured this scene where the Aurora entered the recovery stage and produced these epic pillars of light.

I hope you enjoy it!