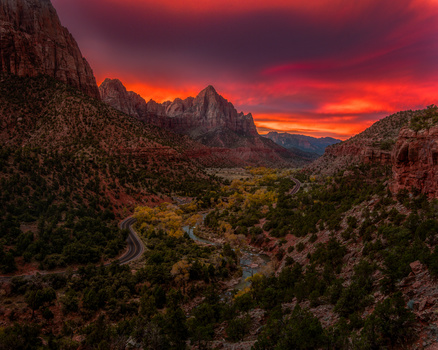 “Fire Watch” Here is a photo I shot while in Zion National Park one morning during a rather fiery sunrise in which not only did the sky burn, but also the ambient light glowed a nice warm orangey hue for most of it this past fall.
I also consider myself a bit lucky to have gotten the clouds this sunrise because most definitely clouds were a scarce thing this past fall down in the south west, but there were a few mornings & evenings in which there were some luckily.
This is also a horizontal pano, but I guess it isn’t your normal pano just because what I was thinking in the field while shooting it was; I’ll shoot this as pano knowing I would only the middle section of a rather wide pano cropped down to a 4x5 or 7x5, but more so I figured that once blended there would be the effect depth with out using any kinda manipulation in photoshop to accomplish the same effect. In the end did that silly idea work?? Idk, In my eyes I would like to say, yes, but you can be the judge of that for yourself. Hahah Anyways, Thanks for looking and have a wonderful day everyone.