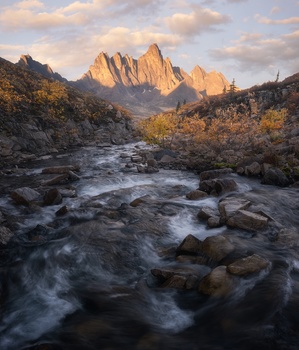 Near the end of our trip in Tombstone Territorial Park, we hiked back to Talus Lake and was gifted with perfect conditions. We had three nights in a row with Aurora, and perfect weather to sunbath in and relax. It was a nice change of pace compared to the first half of our trip. This particular morning, Jacob Klassen And I hiked down to a nearby River to shoot sunrise. I tell ya, waking up for a sunrise shoot had never been harder. 6 days in the backcountry and countless hours awake at night shooting the Aurora took its toll on me. However, when you shoot with a gamer like Jake, you get after it!

Initially, I shot higher up along the river bank. But as the light continued to make its way down the mountain, I dropped down to the river and found this cool composition where there were mini cascades that help sweep the eye towards the peak.

This shot utilizes a sky that I shot from the following day. I wanted to make use of both shots, however my comp sucked the day after, and the skies in this composition weren't doing it for me. So, I combined best of both worlds. Being one of two images in my entire portfolio that has a sky replacement, it's easy to say I have very critical guidlines as to when it's okay for me to do so. In this case, both shots are of the same peak, same time of day and same trip. With this, I'm able to personally connect with the image, which is the most important part in my processing!

I hope you enjoy!