We Review the Godox Lux Junior: This New Flash Works With All Cameras

Looking for a competitively priced compact flash that will fit in your pocket and work with your Fujifilm X-T4, your Sony Alpha, and your Leica M6? Check out our review.

You’re in luck. The new Godox Lux Junior is a new retro flash that works with all digital camera systems and even with film cameras. Not only that, the Lux Junior looks like it's stepped out of the swinging 60s, so it will be sure to be a hit

One Flash To Rule Them All?

This may sound like a dream come true for many photographers, but there's good and bad news.

The good news is that the Lux Junior can be used with pretty much every camera, as it uses a single pin to fire the flash. The bad news is that this single pin means the flash cannot read the settings from your cameras; in other words, you can’t use it in TTL mode.

This differentiates it among other flashes on the market, including its Godox stablemates.

For example, take Godox’s range of hot shoe speedlights, such as the V860 III. With this flash, a letter after the model denotes which system it’s compatible with: F for Fuji, C for Canon, N for Nikon, S for Sony, and O for Olympus and Panasonic. Each brand has different pins and software that communicate with the cameras and operate in TTL mode.

Although there’s no TTL, don’t be fooled. The Lux Junior packs a mighty powerful punch and is very capable of producing fantastic results, especially for something so small and competitively priced.

Specs at a Glance

What’s in the Box?

Like other Godox products, the Lux Junior is attractively branded and presented. Inside the box ,you’ll find: 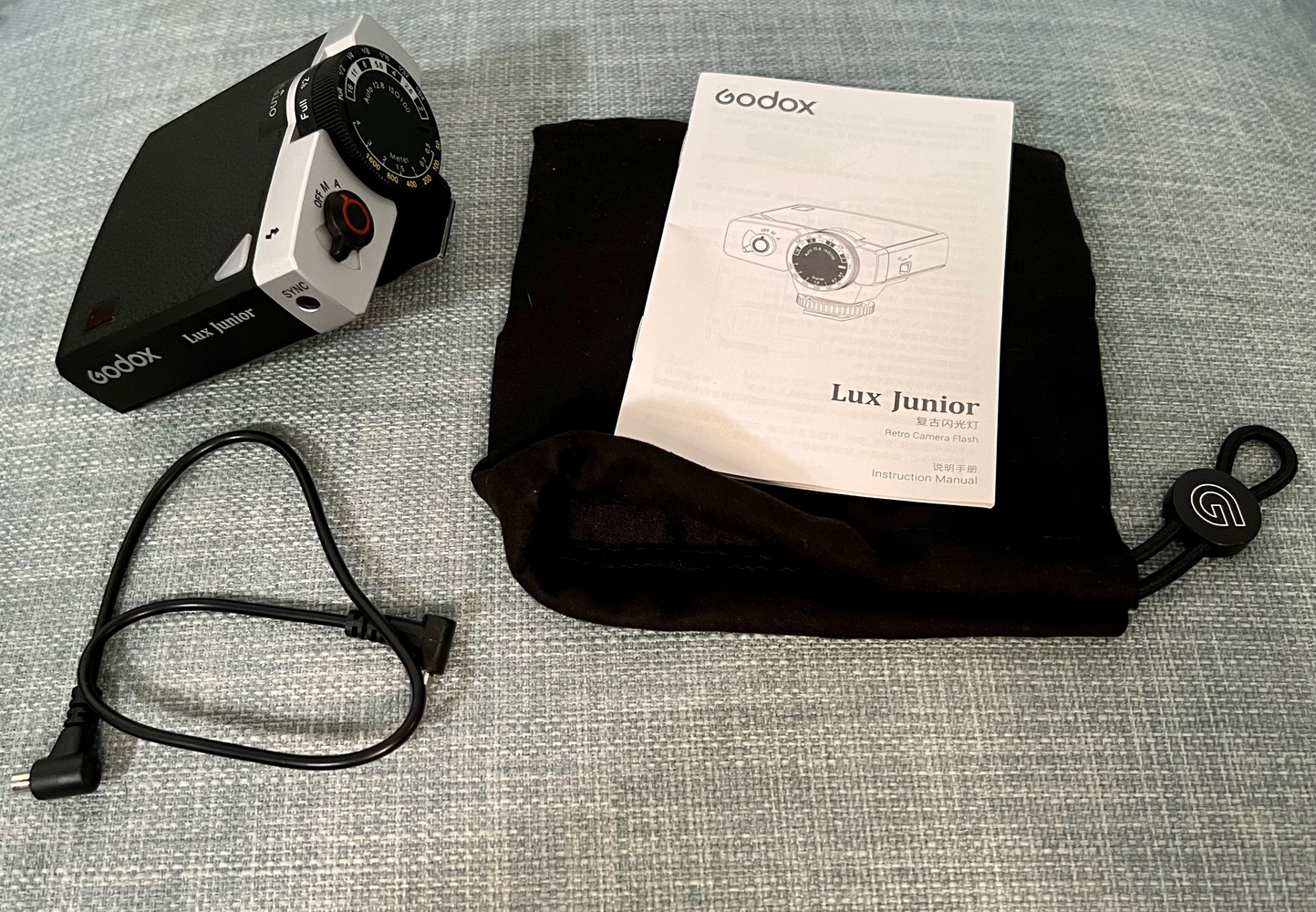 First impressions of the flash itself were positive. Small and light, it can fit in your pocket and weighs just 4.5 oz (130 g). It has a nice clickable dial on the back to control flash output in manual mode.

The top of the flash has a nice texture, though, of course, it’s entirely made of plastic. The storage bag is a nice touch for keeping it protected from scratches. The sync cord seems quite short at first, but it was comfortably long enough to work on both my Contax G1 and Nikon FM3A film cameras.

As with other Godox products, I find the text in the manual to be quite small. Perhaps it’s my advancing years and declining eyesight, but I wish they’d make the text a bit bigger. Luckily for me, they also publish a PDF copy of the manual online so I can enlarge the text and read it comfortably.

With a positive first impression, I was keen to put it into action. The first step was putting 2 AAA batteries in, but this turned out to be a little tougher than expected. I felt like I had to be a little rougher than I would’ve liked just to get the cover off.

Once the batteries were loaded up, we were away. I switched the flash to manual mode and pressed the test button a few times. I then mounted the Lux Junior on my Fujifilm X-T4 and started to take some test shots.

Flash recycle times varied depending on how new the batteries were and what power of flash I was using, but generally, it was almost instant. The battery life was also pretty good, but I’d advise having a couple of spare AAAs on hand.

There are two dials on the back of the Lux Junior flash: an inner dial and an outer dial.

The outer dial controls the flash power in manual mode. Switch the flash to M and you’re away. Control the flash output by rotating the dial, which has a nice click to it. You can change the flash output to seven values, ranging from full power to 1/64 power.

It’s quick and easy to shoot in manual mode: take a test shot, review the results, then dial the power up or down depending on the results. I did this by guessing combinations of flash power and aperture that would look good, but if you’re a more technical photographer, help is at hand.

The inner dial of the flash is effectively just a cheat sheet of light values so you can work out combinations of aperture, shutter speed, ISO, distance, and flash power. You can spin this inner dial a million different ways, but it has no effect on the flash output.

The automatic mode intrigued me: remember that this is not a TTL flash. As it turns out, there is a tiny light sensor on the front of the flash that changes the flash output depending on ambient light. You can test this by firing the test button, then covering the light sensor and firing the test button again. As you can see in my video, you’ll notice the difference.

The user guide lists some default values for ISO, aperture, and distance, though I just winged it. Auto mode is not terribly sophisticated, but at the same time, it worked fairly well in my test shots.

There are two ways you can use the Lux Junior with film cameras, either on the hot shoe as with digital or with the sync cable that comes in the box. I tried both with great results.

Of course, with film, you’re not getting the instant feedback of digital, so I was worried about how my roll of Kodak 200 would turn out. In the end, I was pleasantly surprised. There were a few shots that were underexposed, but the rest looked great. I also took some shots with the help of my Sekonic light meter, and they turned out perfectly.

Although it was fun, with the cost of film rising, I’d prefer to stick with my Contax TLA140 on the G1 next time.

The Lux Junior has a couple of nifty tricks up its sleeve. On one side of the flash, there are S1 and S2 settings to trigger other Godox flashes.

Using S1 will fire the Lux Junior in response to another manual or TTL flash. Using S2, the flash will respond similarly, but ignore the initial flash.

Is This the Best Photography Accessory You Can Buy for $69?

I think it is. I thoroughly enjoyed using the Godox Lux Junior flash. It’s light and compact and can fit in your pocket. Despite its small size, the flash packs a powerful punch. I had consistently good results in both manual and automatic mode.

If you like your flashes even more retro-looking that this, also check out Godox’s other new flash: the cool-looking Lux Senior, which retails for $119.

Matt Murray is a travel, portrait and stock photographer from Brisbane, Australia.

Business / January 2, 2014
Three Driving Forces That Will Shape Your Photography In 2014

Education / May 3, 2019
Go Ahead, Use Your Old DSLR Flashes on Your New Mirrorless Cameras
Log in or register to post comments
4 Comments

I do not understand how you recommend this flash. All the pictures you posted are overexposed and you are an experienced photographer. A good TTL flash, even by Godox costs less and do a better job. Either you have a lot of money and buy many brands of cameras, and then you can afford many flashes (on use a wireless transmitters with multiple brand specific receivers) , or you stick with one brand and go full TTL.

None of his photos are overexposed. They barely, if at all, touch the right side of the histogram. You might want to check your monitor's brightness, otherwise, all your photos may actually be underexposed.

When a product markets "retro", it's usually for fun. Nothing wrong with that. Especially when they are relatively inexpensive.

Good discussion. I don't think the photos in this article are overexposed, but having said that, they are not perhaps as flattering for skin tones as they could be. For me, the Lux Junior is about having fun and recreating the 90s / early 2000s bright flash look. I usually use TTL flashes, so it's good to do something out of your comfort zone and support a new product.

I think something important to remember is that this is a NEW flash that not only works on digital cameras, but also works on old school manual film cameras. This guy will look right at home on top of a Nikon FM2 for example.